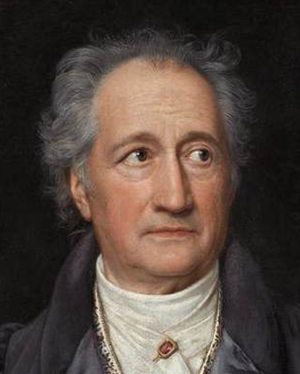 One outstanding problem Goethe identifies is the dependence we come to have on ‘theory’ – and here he might well be talking not about science but about literature or political history or moral philosophy. When we get excited too quickly, too early, by a theory it stops being merely that – a provisional attempt to codify and explain experience. Instead it becomes a substitute for – and ultimately a bar to – experience. So that someone in the grip of a theory cannot really recognize what is before their eyes.

This isn’t ultimately to say that there is no place for theory –and, in any case, Goethe has plenty of theories of his own. The distinction he is trying to draw – and it is a highly pertinent one – is to do with the stage at which you apply the theory, and what role it plays in your experience.

I am currently trying to understand better the resistance open-minded and conscientious students have to certain kinds of theory. I’m interested in this for both personal and professional reasons.

The personal reason is to do with my own schooling. I was a curious child. I wanted to learn about the way the world worked, but I found theories to be a terrible barrier. Theories were presented to me as keys to unlock the way the world was; messy experience and independent thought were seen as much less dependable. There are others, the implication was, much better schooled and heaps more intelligent and perceptive than you. Learn what they thought; don’t waste time thinking it all through for yourself. I found it alienating and confusing. I wanted to try to make sense of my own experience. Sure, once I’d got my head around the problem and begun to see that some of my own thinking wasn’t getting me where I wanted to be, then it was helpful to turn to others for their help in getting me out of tangles. But not straight away, not before I’d at least had a go myself. I remember, though it’s 50 years ago, sitting in a history class learning about the French Revolution. It was interesting, this event where suddenly a kind of out-of-control blood-letting was released, a kind of unfeeling cruelty became the way to be. I had been reading ‘A Tale of Two Cities’, and wanted time to think about why Madame Dufarge was such a fascinating and popular figure, sitting there knitting at the foot of the guillotine, passing her acerbic comments as another head rolled. What was all this saying about people? What was it saying about some of cruelty I’d seen in my own school playground? But there wasn’t much time for this thinking; there was a test soon, on the causes of the Reign of Terror, and these causes were neatly summarized in our textbook. I remember trying to memorise the textbook’s summary by making a mnemonic out of the first letters of each ‘cause’.  The pace and the pedagogy were anathema to my slow way of thinking. Approaches to history teaching have advanced way beyond what I experienced in the 1960s, but the scars remain. I resented, and still resent, not being given the time to think for myself.

That’s the personal reason. The professional reason is the resistance some of my students have to theory. Armstrong, in the quote above, suggests that the resistance might have something to do with timing. Introduce theory too soon, and it becomes a substitute for experience. Some of my students have probably had a gutful of this kind of premature theorising, and have developed a resistance.

In a lecture earlier this year, I suggested that our relationship to theory could be thought about diagrammatically as follows:

First we experience something. It leads to some kind of affect, often unsettling, and further reflection reveals the existence of a gap: there’s something useful we don’t know, or some skill we lack. We then ‘think powerfully’, which often involves finding out what others have discovered; this is where theory comes into its own. We then act in the light of our new knowledge or perspective or skill, and we see what happens. Experience leads us to theory, which leads us to action. Goethe himself put it provocatively like this:

I hate everything I’ve merely learned – learning which doesn’t immediately enliven my thinking or enhance by capacity for action.

We’re grappling with this whole issue in our current secondary teacher education program here at the University of Canberra.  We begin many of our units with an invitation to our students to engage with nine Provocations which we’ve garnered from the fertile questions (Harpaz 2005) we find our students most often ask.

We then ask our students, in their major assessment pieces, to explore these questions through deep, research-informed, reflection on their experiences while out in the schools.

By the end of our course, most students seem more comfortable with their relationship to theory. It has become an aid to their attempts to address an experienced gap, not a substitute or diversion or an irrelevance.

That’s my hypothesis, anyway! This is the field of some of our research.

1 thought on “Goethe on theory’s relationship to experience”